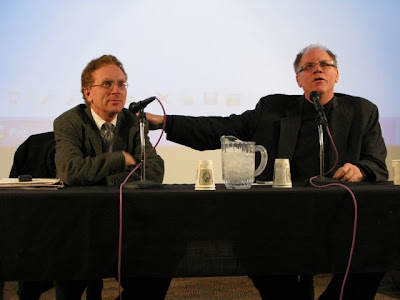 Some 200 people turned out this afternoon at the Siebel Center for the first-ever live broadcast of Media Matters on WILL. Host Bob McChesney and gust John Nichols, Washington correspondent for The Nation, talked about their new book The Death and Life of American Journalism (Nation Books) and took questions from the studio audience.

With reporters being but by the thousands across the United States, newspapers folding, and broadcast news mostly focused on entertainment, the future of journalism is in serious jeopardy. Who will report local news and how will they be paid, ask McChesney and Nichols? They propose a number of ways federal subsidies could support local news, much as America's Founders supported newspapers by subsidizing postage and printing.

At WILL we're working on several projects to put skills and tools in the hands of citizens who know their communities and can tell their own stories. The ability to produce and distribute media is no longer dominated by large entities, and anyone with a digital camera and a laptop can produce great journalism if they have the desire, skills, and ethics. A question for us is how can WILL stimulate, foster, and support community-based citizen journalists? We hope to discover answers in the coming months. Meanwhile, it helps to have an open dialogue on the status of journalism and media in America, and bring more voices to an honest discussion of the role of news in democracy. The Death and Life of American Journalism should help that process.

Say it ain't so! Carl Kasell, the voice of NPR newscasts, will retire from that duty on December 31st. This from NPR:

After 30 years of waking up at 1:05 a.m. to anchor the top of the hour newscast during Morning Edition, Carl Kasell has decided the time has come to sleep in. He will leave his newscast post at the end of this year... but happily for all of us he isn't going far. Carl will continue to be the Official Judge and Scorekeeper for Wait Wait.. Don't Tell Me!, the show that turned him from a newsman into a rock star! Carl will also continue his travels to stations around the country on NPR's behalf. Carl has raised more than a generation of listeners with his calm and authoritative newscast and has been the first voice many people heard each day. He also has been a teacher and role model for NPR newscasters... not only because of his skill and experience, but also because of his kindness, integrity, and professionalism. Carl has walked into the newscast booth tens of thousands of times during his tenure. He was there the day that Iranian students took over the American Embassy in 1979... he was there when the Berlin wall fell in 1989 and he was there again when two jetliners slammed into the World Trade Towers in 2001. And he’s been there every week since. Carl first walked through the doors of NPR in 1975 as a part-time newscaster ... and was on the air in November 1979 at the inception of Morning Edition. In 1995, he hosted Early Morning Edition, which eventually led to Morning Edition’s early start time of 5 a.m. eastern. Carl is a proud member of the North Carolina Journalism Hall of Fame and a recipient of several major broadcast awards, including a Peabody which he shares with Morning Edition and another he shares with Wait Wait. 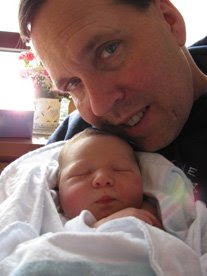 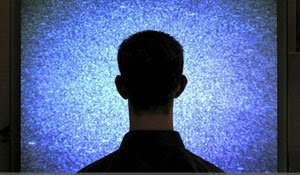 Digital television is a great idea in theory. The reality is proving messy at best.

In the best-case scenario, you'd simply turn on your new digital TV and it would pull in video more beautiful than a DVD. Since each TV station can now broadcast up to four different channels, you'd have many times more programming choices than before, over-the-air without paying for cable or satellite service. Some people actually have that experience.

For others, just getting a good digital signal is like alchemy. You need an antenna, and sometimes an outdoor antenna, because the signal strength of digital TV is about one-hundredth that of analog. With analog a weak signal might yield a noisy picture, but with digital you get...nothing. Like anything digital, it's either on or off. If you have the wrong antenna, you won't get the new digital VHF channels including WILL's channel 9. So you have to know something about antennas, which most of us probably thought we'd left behind along with 8 track tapes.

But wait, the chaos gets better. If you have cable service, you may no longer even get your favorite local stations at all. That's what happened in the Bloomington, Illinois area, where WILL-TV is no longer available to Comcast cable customers. Or more precisely, WILL-TV is no longer available to Comcast customers who have the analog Comcast cable service. If you have the analog Comcast cable service, do you even know that? Once you ffigure that out, you can upgrade to digital cable for free and get a new digital set-top box. Comcast will keep your monthly bill the same for 12 months, but after that your bill will likely increase. Or you can drop cable and get WILL-TV over-the-air, if you have a TV with a digital tuner, or a digital TV converter box, if you are within range of WILL-TV's digital TV signal. Lots of ifs there.

Further, the 50 some cable services throughout central Illinois process their signals in different ways. An HD signal on one cable service may look very different from another service. We're getting many reports of out-of-synch audio, and people naturally assume we can do something about it.

Still further, the aspect ratio for HD is 16x9, whereas Standard Definition (SD) is 4x3. What does a 4x3 picture look like on your 16x9 HDTV? Hard to predict, because it depends on both the station producing the signal, and how that signal is processed by your cable service.

Many if not all of these issues will be sorted out over time. We may eventually arrive at the promised land of digital TV actually working. Meanwhile, if you're totally fed up with trying to watch TV I have a suggestion. There's always something good on the web.

The place just filled up with guitars 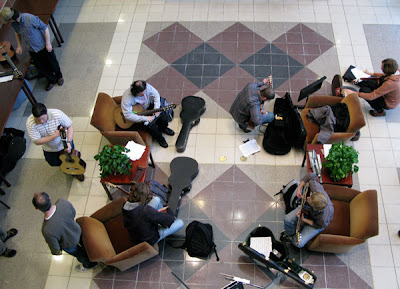 Stepped outside of my office today and found the Campbell Hall lobby brimming with guitars and guitarists. The 17-member Guitar Ensemble from Illinois State University was here to play a Bach Brandenburg Concerto in advance of their concert in the evening. The segment aired today on WILL-FM's new Live and Local with Kevin Kelly.

Print journalism spent the 1980s and '90s taking profits and then, in the decade that followed, impaling itself on the Internet. - David Simon, Washington Post

So the Baltimore police no longer provide reporters with the names of officers involved in police shootings. Their ranks have been so thinned, no reporter has even asked for so long the police forgot the law mandates they provide this information without delay, to anyone. But it's not just the law enforcement beat in Baltimore. Science and environmental reporters, political reporters, financial reporters, and especially foreign bureaus have been cut, cut again, then cut some more over the past two years. At a time when so much news is being made, and the stakes are higher than ever, our view of the world is dimming. And that's today's news.

WILLblog was always intended to provide an insider's view on the public broadcasting world. (Soon we'll call it public media, but that's another post for another day...) Today I have some troubling news about struggling stations around the system. Of course just about everyone is dealing with fallout from the economic mess we're in, so this isn't meant to say "poor us." This is, however, about public broadcasting, so here goes: WNED REDUCES BUDGETED EXPENSES AND STAFF POSITIONS (Buffalo, NY) State funding for public TV, radio on chopping block (Charlottesville, VA) Layoffs at WBEZ, Vocalo (Chicago, IL) These are only three news items about very large cuts at local stations. I have friends at other stations all over the country, and many of them are laying off staff, cutting local programs, and reducing services just to survive. Of course newspapers across the nation are being hit even harder. In the case of some, like the Chicago Tribune, solvency is imperiled by excessive debt from buying other newspapers. Others, like the Rocky Mountain News, just couldn't make their payroll. Here is an important question we must raise as high as possible: At a time when, more than ever, we need to know what's happening, who will report the news? One other thing occurs to me as I ponder the fate of local npr and pbs stations: We have a chance to salvage the disaster happening to communities whose newspapers are folding, if we can remain strong enough to deliver. Might be a big if...